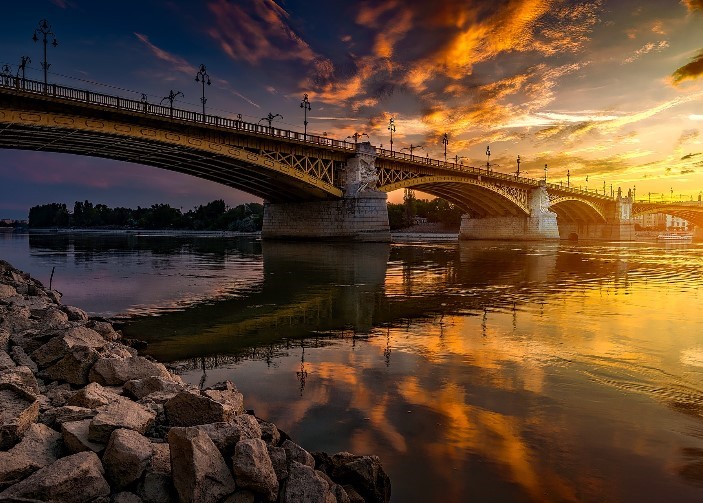 Kosher River Cruise on the Danube

The amazing MS River Voyager sets a new standard for luxury on the rivers of Europe. Ship features deluxe larger Staterooms - mostly with French balconies, elegant dining room and its special Captain’s Lounge with its retractable ceiling which allows you to enjoy the beautiful scenery. You can also find onboard reception, gift shop, fitness center and massage room. This Deluxe river ship also features an intimate and relaxing cruising experience, with no more than 168 passengers on board.

The Danube River runs over 2,800 kilometres (or 1,800 miles). As Europe’s second largest river, it runs through more countries than any other river in the world. Its grace and beauty have birthed a colourful history, witnessing the rise and fall of empires, the rebuilding of Eastern Europe, and the diverse, fascinating history of the Jewish people. 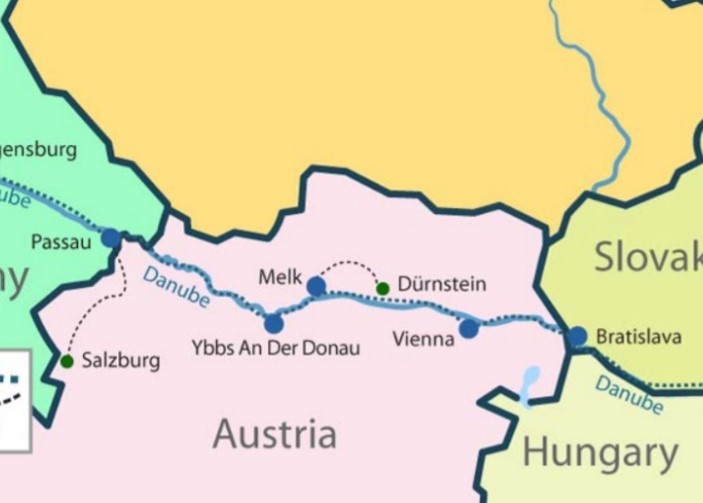 FROM: BUDAPEST TO: PASSAU 7 NIGHTS CRUISE

Day 1: Budapest Transportation will be provided from Budapest Airport to our ship, where you will have time to check in and settle into your cabins. Tonight, we will meet for our welcome dinner with the Captain and our onboard crew. We will dock in Budapest overnight.

Day 2: Budapest Discover the magical city of Budapest with a guided bus & walking tour. Hungary’s capital is often referred to as the “Paris of the East” and is a favorite among travelers worldwide. The tour will give you a sense of Budapest’s colorful history alongside insights into the vital role the city’s division by the Danube river has played in society over the centuries; One side is known as “Buda” and the other as “Pest”. Our first stop is the famous Neolog Synagogue, also known as the Dohanny Synagogue, Europe’s largest synagogue. Designed in oriental style, it can seat some 3,000 people. This location is also home to the Heroes Temple, Jewish Memorial, museum, and graveyard. Built on the site of Herzl’s home, it is no surprise that the 13-year old Theodor celebrated his Bar Mitzvah here. Our next stop is the Jewish Museum and other famous monuments located on Andrássy Út street, including the exquisitely designed Opera House, Hero’s Square, the underground market and St. Stephen’s Church. Lastly, we’ll visit the Parliament, which strikingly resembles the British Parliament building, with its nearly 20 km of corridors! Return to the ship for lunch This afternoon we’ll cross the famous chain bridge and visit the historic Buda Castle and coronation of the Matthias church, where the famous Sisi and her husband were crowned as Hungarian rulers. Take in the unforgettable views of the city from the fabulous Fisherman’s Bastion before We’ll meet for dinner followed by a live band show as our ship sets sail to Bratislava.

Days 3+4: Bratislava Scenery cruise from Budapest As our ship sails out of the heart of Budapest on the picturesque Danube River we’ll pass under several stunning bridges, enjoying views of the magnificent architecture lining the riverbanks on both the ‘Buda’ and ‘Pest’ sides of the city. The Banks of the Danube in Budapest are UNESCO-listed historical landmarks, recognized for their well-preserved, stunning beauty. We will reach Bratislava during lunch and later travel by coach to visit Chatam Sofer’s burial site. Sofer was a widely influential posek and leader of the prestigious Pressburg Yeshiva. Hundreds of students and extended family members who are influential in the Jewish community ensure Sofer’s teachings and writings continue to inspire today. A visit to his burial place is an uplifting way to greet Shabbat in Bratislava. We will Return to the ship to prepare for Shabbat. Our cantor will lead Kabbalat Shabbat and Ma’ariv prayers. On Shabbat morning, we will visit the local Jewish community in Bratislava’s Heydukova Street Synagogue, Bratislava’s only Synagogue and one of only four active synagogues in Slovakia. While three other synagogues survived the Holocaust, they were demolished in the 1960s. Bratislava’s Synagogue also houses the Bratislava Jewish Community Museum, a Slovak National Cultural Monument. It is also home to the prestigious Pressburg Yeshiva. Following morning services, a community leader will take us on a private tour of the museum, located on the upper level of the Synagogue. We will learn about the Jewish community of Bratislava, which pre-World War II accounted for 12% of the population. We’ll explore the captivating collection of Judaica and religious artifacts, many of which were formerly hidden and later collected and preserved by members of the Jewish community. We’ll return to the ship for a Shabbat meal. After Shabbat dinner, we will have some time to rest before enjoying a lecture, tea and cakes. Following the lecture, we will have Seudah Shlishit with our cantor leading us in song. We will pray and do Havdalah. Our ship will continue sailing as soon as Shabbat ends.

Day 5: Vienna Our morning begins with a visit to the first district and a bus tour of the Ringstrasse, Vienna’s circular boulevard, which boasts some of the city’s most spectacular sights: The Parliament Building, City Hall, Opera House, palaces, museums and parks. After the bus tour, we’ll continue by foot to the elegant Kärntner Strasse and Graben pedestrian areas and visit the majestic St. Stephen’s Cathedral. Our tour continues to its Jewish part. During the middle ages, Vienna was home to a thriving Jewish community, one of the largest and most important in Europe. Famous Rabbis taught and worked here, making Vienna an influential center of Jewish culture and knowledge. This lively and creative environment ended violently in 1420-21, with the expulsion and murder of the Viennese Jews. The ruins of the then-destroyed synagogue, excavated under the Judenplatz in 1995, bears witness to the life and destruction of that medieval community. The Museum at Judenplatz opened in 2000 as a branch of the Jewish Museum of Vienna. The city also unveiled the solemn Judenplatz Holocaust Memorial in Judenplatz; A reinforced concrete cube designed by British artist Rachel Whiteread, resembling a library with its volumes turned inside out. Our museum tour includes an animated virtual tour about Jewish life that allows us to walk through a reconstruction of the city virtually. It also showcases the Jewish festivals and customs of the time, making for a lively depiction of life in this medieval Jewish community. New information, including scientific and architectural findings, continue to shed more light on medieval Jewish Vienna. Return to the ship for lunch. This afternoon we will visit Schönbrunn Palace, the summer residence of the Habsburg family, most notably Empress Elisabeth, better known as Sisi. Boasting 1441 rooms, this breathtaking palace is one of the most important architectural, cultural and historical monuments in Vienna. The history of the palace and its vast gardens, which spans over 300 years, exhibits the changing tastes, interests and aspirations of the Habsburg monarchs. Today it is mostly back to its original condition and is quite a sight to see! This evening, join us for an optional excursion to a concert in Vienna. As the German name suggests, the “Kursalon Palace’’ was initially conceived as a spa resort. Over time, this magnificent building in the heart of Vienna has grown into a vibrant hotspot for classical music. In the very place where Johann Strauss used to direct his orchestra from the first violin position, Vienna’s classical music scene can once again be experienced in all of its essence and glory. Accompanied by excellent opera vocalists and enchanting ballet soloists, this classical concert is an experience you don’t want to miss!

Day 6: Dürnstein & Melk This Morning we dock in Dürnstein, on the stunning Danube Riverbank. Surrounded by luscious vineyards, this charming small town is known as the Pearl of the Wachau Valley. Marvel at the ancient 12th-century castle, famous for the King of England’s imprisonment, Richard the Lion-Hearted. Visit the town’s center to get a fantastic view of the surrounding valley and castle ruins. Return to the ship for lunch as we sail to Melk. Considered one of Austria’s most important wine regions, terraced vineyards along this part of the Danube produce fruity Rieslings and Grüne Veltliners, two of Austria’s most popular white wines. This afternoon we’ll visit Melk. This charming city is located at the Northwestern tip of Austria, at the confluence of the Danube and Melk rivers in the luscious UNESCO World Heritage Wachau Valley. It’s famous for the Baroque-style Benedictine Monastery, known as the Melk Abbey, one of Austria’s great cultural highlights and Europe’s largest abbey. Its sheer physical dominance attests to the spiritual and cultural importance that it has held throughout the ages. We’ll also tour the Monastery’s stunning library, which dates back to the 12th century. We will visit a subcamp of the Mauthausen Concentration Camp, which dates back to the end of WWII, as well as other important historical sites including the old post office building, the Coloman fountain, the “House on the Rock” (which was built in the 15th century and is the oldest building in the city), and the municipal square. We will Return to the ship for dinner. After dinner we’ll enjoy a live show with a local band. Tonight our ship sails to Linz.

Day 7: linz After lunch our tour of Linz begins. This beautiful city is the second-most populated in Austria, first settled by Romans during the first century AD. Today Linz iz one of Austria’s most thriving cultural centers, specifically known for its antiques and arts scene. We’ll enjoy a guided walking tour through Linz as we discover the great sites of this city, including the main square, which is one of the loveliest squares in all of Europe, lined with Rococo and Baroque architecture. After lunch you are welcome to enjoy the last part of our scenic cruise towards Passau as we sail through the impressive Upper Austrian Danube. Crossing through picturesque landscapes, we will pass the extremely narrow and the world famous Schlögener Schlinge, the Danube river’s loop, located halfway between Passau and Linz. As we enter Passau and the colorful confluence of the three rivers Danube, Inn and Ilz emerge before us, we say goodbye to one of Europe’s most exciting rivers. Join us tonight for a farewell dinner with our captain and crew.

Day 8: Passau - disembarkation After breakfast transportation will be provided from the ship to the nearest airport. 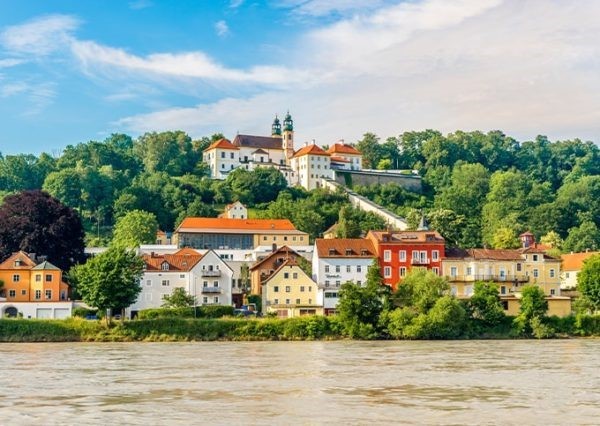 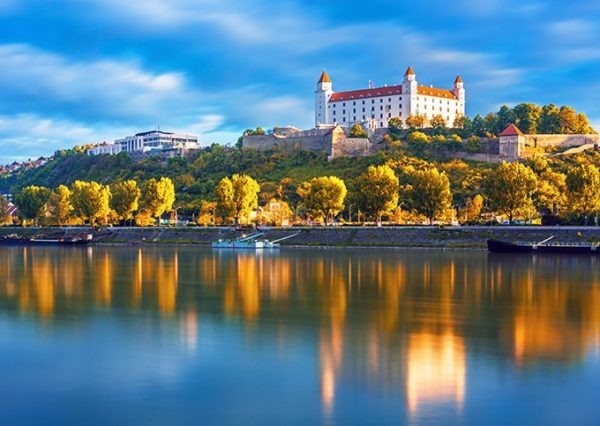 Flights and transfers can be arranged at extra cost.

ATOL protected for your financial peace of mind.